There are many different people involved in any court case, each with their own role to play. Understanding these roles can help make sense of the court proceedings. 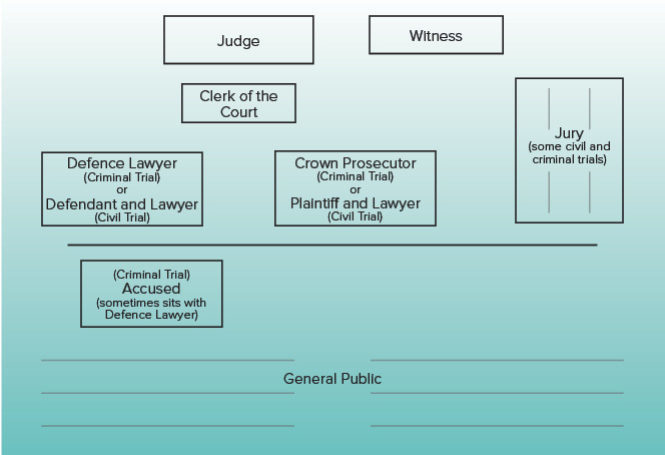 Lawyers hired by the government to prosecute criminal cases are called Crown Prosecutors. They present the evidence against the person charged with a crime to try to establish the guilt of the accused to the judge or jury. Crown Prosecutors do not work for the individuals involved in the case – they act for the state. They are required to present the case fairly.

In criminal matters accused individuals may be represented by a defence lawyer. In a civil case each party may have their own lawyer. Lawyers present evidence to the court to help their client tell their side of the situation.

A person charged with a crime is known as the accused or the defendant. They may have a lawyer to present their side of the case to the judge or jury.

In family law cases, dealing with things like divorce, custody or financial support, the person who starts the case is called the Petitioner. The other party is called the Respondent.

Justice of the Peace

The judge oversees the trial to ensure everyone is treated fairly and has a chance to tell their side of the story. The judge decides how the law applies to the case being tried.

In some cases there will be a jury as well as a judge. Juries are made up of regular people from the community. When a jury is needed, the Sheriff calls a number of randomly selected people to court. The lawyers representing the two sides choose the jury from these people.

The judge explains the law to the jury. At the end of the trial, the jury leaves the courtroom and meets to decide on the outcome of the case. These meetings are secret. If it is a criminal case all jury members must agree for someone to be found guilty.

Other people work in the courtroom. The clerk of the court helps the judge, announces when the proceedings begin and end, and records the evidence exhibits. If an accused person or a witness is in custody, the Deputy Sheriff goes with them to court. The Deputy Sheriff also helps to maintain order in the court.

PLEA can provide you with information to help you understand many legal matters you, a family member or friend may be facing.

ASK US We're here to help.

Planning for the Future

A Death in the Family Estates

PLEA gratefully acknowledges our primary core funder the Law Foundation of Saskatchewan for their continuing and generous support of our organization.