Organizations, whether they are membership non-profits, registered charities, co-ops or simply a group of people who have come together for a purpose, need a budget. A budget is a detailed plan about how you are going to use your resources.

Most often organizations, just like individuals, do not have enough money and energy to do everything they would like to. A budget is a deliberate decision in advance about what will have priority among the many things your organization may want to do. One of the greatest advantages of preparing a budget is that it requires organizations to "put their money where their mouth is."

Your organization may plan on doing many things but those plans that you are committed to seeing through will be reflected in the budget. It is a working document which reflects the joint planning effort of many people and is meant to form the basis for action. It is an important tool used to ensure that your financial management responsibilities are being met.

The budget contains estimates of income and expenses for the twelve month period your organization has chosen as your business year. For example, an organization that runs a school may want to have a year-end of June 30th so that each budget covers a school year.

It can be difficult, especially in an organization's first year of operation, to estimate an amount of expected income for the next fiscal-year. Estimates have to be made based on the best information available to the organization at the time. Some research into possible sources of funding and the amounts that can be expected from them can be helpful. For example, if an organization is in their first year and they are planning on raising income from a fundraiser they may want to ask other organizations, if they are willing to share information, about how much revenue they generated from a fundraiser of a similar type.

It is generally better to be conservative in estimating revenue. Organizations want to avoid learning during the year that the expected revenues are not near the budgeted amount. This could mean that drastic action with respect to the organization's commitments needs to be taken.

The main source of income for many organizations are contributions from the general public, grants from the government and fundraising. All sources of revenue are stated as the actual amount your organization will receive before expenses are deducted. For example, if you expect a fundraising social to bring in $4000 from ticket sales (100 tickets at $40 per ticket) and you expect that it will cost you $1500 (100 dinners for $15) for the dinner, you know that your profit will be $2500. However, you do not simply record the expected profit as income in your budget. You record the whole amount of money that will come in as income. The costs of raising that money are stated in the budget under expenses.

Sometimes an organization may be supported through non-cash gifts, known as gifts-in-kind. For example, if your organization was set up to provide meals for people in need someone might donate food or cooking utensils. For a gift-in-kind the amount that is put in the revenue side of the budget is what you estimate the fair market value of the item will be at the time of the donation. A contribution of service, that is of time, skills or effort is not property and does not qualify as a non-cash gift and is not part of the budget.

In the same way that it is important not to overestimate your income, it is important not to underestimate your costs. If costs are significantly higher than budgeted your organization will either have to raise more money or cut back on planned programs during the year. It is usually easier to decrease expenditures than to raise additional funds but cutting programs can be disappointing for stakeholders whose expectations for the organization may have been higher.

For example, an organization that is going to provide meals for people who need them would have program expenses including such things as the cost of food and other supplies for making meals. They would also need to include the cost of hiring people to run the program (buying, cooking, serving the food, scheduling volunteers) and to do administrative work (preparing financial reports for Board meetings, buying office supplies), unless the program is going to be run solely by volunteers. There would also be occupancy costs (rent), utilities and office expenses. If the organization received a non-cash gift, such as food, and recorded the fair market value as income they would record the same amount as a program expense since the food would be used for their program.

Once the budget is complete you compare the total expected revenue to the total expenses for the year. Adjustments may have to be made to ensure that you are not planning on spending more money than you are planning on bringing in. On the other hand, if you see that you will have more income than expected expenses you will want to plan on providing more programs or services. Some leeway should be built into the budget in order to meet unexpected events. Once the budget is completed it needs to be examined on a regular basis to assess how the plans and estimates compare with the facts. Below is an example of a budget for ABC Inc. 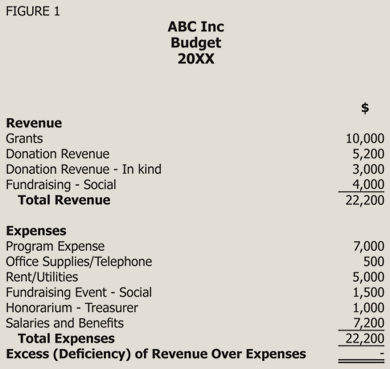 Share your experiences and help us learn more about the state of sexual harassment across occupations and industries. PLEA’s Male Dominated Industries survey is designed to gain insight into the reality of sexual harassment in workplaces traditionally occupied by males. Lend you voice and help shape our programming.

Take the survey 5 minutes to complete

Planning for the Future

A Death in the Family Estates

PLEA gratefully acknowledges our primary core funder the Law Foundation of Saskatchewan for their continuing and generous support of our organization.